Taking a dip at the Jellyfish Lake in Palau 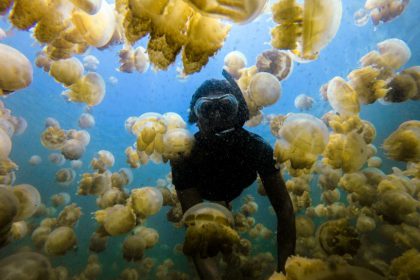 On the remote island of Palau, a harmless type of golden jellyfish inhabits a completely isolated marine lake. Here, visitors from all over the world come to swim with millions of these unique species in one of the world’s strangest and magical environments.

I would have never imagined I could be swimming around jellyfish, but there I was, on a boat on my way to the Ongeim’l Tketau lake, Palauan for the Jellyfish lake. Located at the archipelago of Palau, this unusual marine lake is the only one in the world, where visitors can a swim around millions of jellyfish. There is absolutely nothing risky about this, as this rare species of beautiful golden jellyfish (Mastigias papua etpisoni) are completely harmless and bumping into them simply feels like being touched by a soft balloon filled with water.

“Please, don’t use any sunscreen”, said Matt, one of the tour guides and diving instructor for Sam´s Tours. “Any creams, dirt or elements we take into the water could affect the ecosystem where the jellyfish live”, he added.

Once at the entrance to the lake, security was cautious too. There was a long list of rules at the checkpoint and we had to wash again our bodies with fresh water while our permits were controlled.

Swimming in the Jellyfish Lake is not a cheap activity. Each foreigner has to purchase a US$100 permit that allows him to visit the lake for a period of 10 days. At the same time, Palau is also an expensive country for tourism and is common to pay between US$100-250 for a tour to the lake. Nevertheless, this is not the destination that attracts a luxurious and posh clientele like Bora Bora or Fiji. Palau is a very isolated island in the middle of nowhere, where nature blooms like in any other place in the world and most visitors are adventure and marine lovers, who know about the extraordinary beauty in the country.

Once at the shore of the Jellyfish lake, three other tourists, two tour guides and I were the only people around. From the outside, the lake, not larger than a football pitch, looks like any other lagoon: water was dark blue and there was not much sign of marine life – I was really not sure what to expect.

Following jellyfish from east to west

Matt recommended us to swim to the other side of the lake and follow the sunlight. Jellyfish are photosensitive species and for that reason, they spend most of their lives migrating from east to west following daylight. Each morning most of the population swim until reaching the shadows on the lake’s far eastern edge. Later, as the sun passes overhead around noon, the jellyfish turn around and head back toward the western edge. Here, they stop at the shadow line – a migration pattern that goes over and over again every single day.

It was 10 am in the morning and the sunlight was reaching only a small section of the lake. This exact time is the best one to eyewitness the incredible amount of jellyfish at the lake. “You will see millions of jellyfish at some point. Simply swim straight in that direction”, said Matt before getting into the water. “They call it the wall of jellyfish and it only happens at this time of the day”.

Although the lake is only 30 m deep, we were also advised not to free dive in it. Going below 15 m can be deadly, as the bottom of the lake contains no light and instead of oxygen, poisonous hydrogen sulfide gas. In between, there is a 2 m pink middle layer, consisting of bacteria. Above that, in clear waters, the golden and moon jellyfish swim – this last one is also a harmless type of jellyfish inhabiting the lake, but way less widespread. Still, I encountered at least 50 of these creatures during my visit in the lake.

Swimming at the Jellyfish Lake sounds scary. I´ve never swam close to a jellyfish on purpose and never thought to swim around millions of these animals. Even though I tried first to avoid touching the jellyfish as a natural instinct, there is a point in which I couldn´t evade them. Hundreds of thousands of jellyfish appeared from one moment to another and touching them with my arms, legs and even cheeks became inevitable. First, I was a little worried about my safety, but after bumping a couple of times with them, I realized they are extremely soft and inoffensive – I even pet a couple of them.

Although many people think that this type of jellyfish don´t have stingers, they do. However, these are too small to be felt by us. Like all 70 marine lakes in Palau, these very particular environments were formed by depressions in limestone thousands of years ago. The jellyfish, as other marine species, were confined in the lakes and had to adapt to the new living conditions. Since the jellyfish here feed from algae and have no natural predators present, their stingers became inoffensive for larger animals like humans.

This natural scene was not like that several months ago. In 2016, Palau suffered from El Niño and a severe drought. The combination of these natural events sunk the population of mature golden jellyfish from 20 million to almost zero. Only around end of 2018 the population of jellyfish recovered and visiting the lake became an option again.

Although the Coral Reef Research Foundation of Palau reached the conclusion that human behavior did not affect the decrease of jellyfish, the government of Palau took very seriously the protection of these rare environments towards tourism. Access to the lake became more limited and prices on the permits increased 100%. All of this in order to avoid mass tourism – measures I´m sure each one of us really appreciate.

Ongeim’l Tketau is not the only jellyfish lake in Palau; there are other five lakes containing jellyfish in the country, but only this one is accessible for tourism.

Read more: The green pledge you have to sign in your passport upon arrival

Swimming at the Jellyfish Lake was one of the world most magical underwater experiences I had, and Palau is a destination every traveler should have in their bucket list. The government of Palau, tour operators and environmentalists understand that the lake needs protection but at the same time is Palau´s largest tourism driver. It´s difficult to keep that balance and although I hope this surreal place stays open for a while, it is in our hands as visitors to raise awareness on how we protect unique environments like this one. 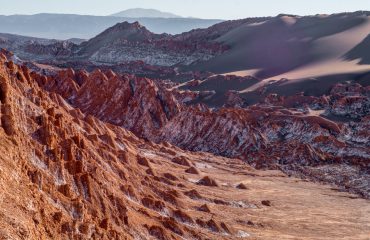 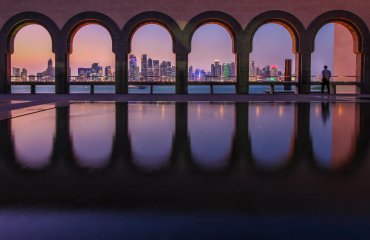