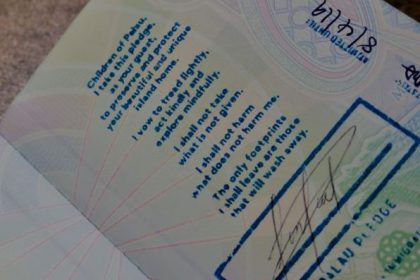 While in most countries you get an entry stamp or a visa in your passport upon arrival, Visitors of the island of Palau visitors have to sign a pledge compromising in protecting the environment.

I was on my way to Palau and the famous Jellyfish Lake. Minutes before landing, the airline crew screened an inflight video about the country´s immigration policies and the Palau Pledge. In this short film, an animated giant monster arrived in Palau and damaged the biodiversity of the country. He didn´t do it in purpose, but simply didn´t realize it until local children came and explained the impact he can have on their country.

This is an analogy of what you and I do when we travel, as we unintentionally cause some damage to the environments we visit.

This video is shown on every single flight into Palau and introduces the Palau pledge: an agreement stamped in the passport, which each visitor has to sign and is made to ensure a traveler protects the landscapes of Palau.

Addressing to the children of Palau, the pledge is simple and eloquent. It expresses the importance of protecting the biodiversity of this country and be more conscious as travelers.

Children of Palau,
I take this Pledge,
To preserve and protect your beautiful and unique island home.
I vow to tread lightly, act kindly, and explore mindfully.
I shall not take what is not given.
I shall not harm what does not harm me.
The only footprints I shall leave are those that will wash away.

An era where tourism can be good and bad

Palau didn´t learn in a hard way on how damaging large-scale mass tourism could be for a country. There have been several cases like Barcelona or Venice, where locals have been protesting many times at the government to impose severe regulations for tourists. We all have seen the photos of overcrowded cities and damaged national heritage sites worldwide.

And although Palau can´t be compare to Angkor Wat, Paris or Venice, this tiny nation´s environment is extremely fragile – this is a country, where its number of visitors quadruples or quintuples its population and the consequences of mass tourism could be catastrophic for its natural ecosystems.

“Tourism is the lifeblood of countless communities and nations around the world, but it can also be a seemingly unstoppable destructive force”, said in an article David Griner, an editor for Adweek’s Magazine referring to the positive and negative impacts of tourism to a country.

More than a marketing campaign

Palau´s new entry immigration stamp gave also a lot to talk about. Not only because it´s the first time a pledge has been written into a country’s immigration policies, but also for the large amount of publicity the campaign generated. The work done around the Palau Pledge campaign won several awards, including the D&AD Awards on creative work, and while some might say this was just a publicity stunt to boost the numbers in tourism, the government did apply new measures to increase the sustainability in the country.

In 2015 the parliament did their duty by turning most of its territorial waters into a marine sanctuary. Now they are a 500,000-square-kilometre natural reserve, in which commercial fishing and oil drilling is completely banned.

This pledge is now a way from Palau to present the world, how they are dealing with environmental issues, over tourism and sustainability.

“It is our responsibility to show our guests how to respect our island home, just as it is their duty to uphold the signed pledge when visiting”, stated the President of Palau, Tommy Remengesau.

Read more: Taking a dip at the Jellyfish Lake in Palau

Sustainability is the new trend

After Palau´s campaign, other destinations decided to step up as well in reminding us to protect its natural landscapes and culture with respect. Now, visitors to New Zealand can agree to the “Tiaki Promise”, in which they pledge to be protectors of the environment during their trip and not long-ago Hawaii presented the very similar “Pono Pledge” too.

Signing a pledge doesn´t necessarily mean travelers will protect the environments of the places they visit, but I´m sure they will make them more conscious about the damages traveling does when someone visits a country.

Being sustainable for tourism doesn´t mean you have to stop visiting Venice, Barcelona or Paris, it simply means we have to learn in which aspects we are leaving a negative impact at the country and change this behavior. 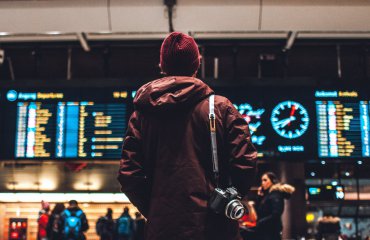 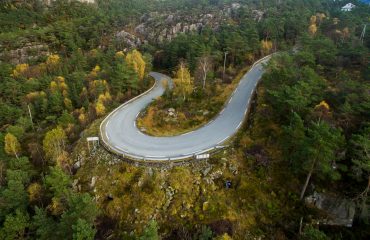