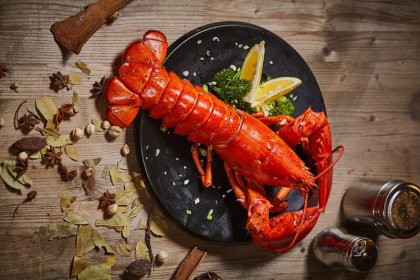 Lobster rolls, lobster poutine or a classic lobster with butter. Nova Scotia’s love for this delicious crustacean is visible everywhere you go.

When Nova Scotian Pam Wamback told me that I would be able to find lobster every day while traveling around Nova Scotia, she was not joking. Nova Scotia is not only known for its charming fishing villages and astonishing coastline, but also for its culture and love for lobster. Lobster plays such a big role in the province, that some even say:  If you haven’t eaten Nova Scotia lobster in Nova Scotia, then you haven’t really eaten lobster!

The humbler past of lobster fishing

Lobster is seeing as one of the most exclusive dishes in modern cuisine and depending in which part of the world you are, a full lobster meal could start at around 60 to 70 Euros. Of course, with prices like these, lobster was never part of my menu and before visiting Nova Scotia, I had a whole lobster twice or three times in my life.

However, lobster was not always as exclusive as nowadays and Nova Scotia is a good example on how everything started. The province never had a shortage of lobster and it is said when European settlers first arrived in Atlantic Canada, the lobster stock was so large that with every storm, lobsters would be washed ashore for up to a half meter on the beaches and nobody wanted to pick them up. At that time lobsters were considered such a cheap source of meat, that only the poorest people in the region were eating it and some even didn’t consider it proper food.

Only until the 18th Century the lobster industry in North America boomed and from the cheapest food of the Atlantic coast, lobster turned into one of the biggest exports in Nova Scotia and a delicacy worldwide.

Are the world’s best quality lobsters in Nova Scotia?

Within three centuries the industry changed a lot. Lobster is acknowledged as the food for the most privileged and lobster fishing became a key industry in Atlantic North America.

Everywhere I went in Nova Scotia lobster seemed to play a big role: lobster boats and traps were almost in each fishing town and in each restaurant offered at least one dish using this delicacy. The love for lobster has been spread as well in other Nova Scotian industries and locals are very proud of the lobster culture in the region. It is a fun way to start a conversation in a pub and you might even hear bizarre stories like the brewery which decided to make beer with lobster taste or the ice cream factory which has lobster as one of their flavor choices. Lately I even heard about Christmas trees being decorated with little lobsters at Nova Scotian homes.

And while many consider that the best lobsters in the world are Maine lobsters, Nova Scotian and Maine lobster are both Homarus americanus and due to the colder Canadian waters, many argue Nova Scotian lobsters have a stronger flavor and tenderer meat. In addition, Canadian fishermen say they sell large part of their production to the United States and in many places if you order Maine lobster at a restaurant, there is a big chance the meat on the plate comes actually from Nova Scotia.

An uncertain future in which conservation is key

The Nova Scotian lobster industry has been living their prime in the past decade. During the 2018-2019 season fishermen caught 28.753 tones of lobster (which is worth approximately 350 Million Euros) and for this upcoming season, which started in November 2019, it is expected to become the largest lobster season in history.

According to journalist Livia Albeck-Ripka, one of the key reasons for this boom is the latest effects of climate change. “Since the early 1980s, climate change had warmed the Gulf of Maine’s cool waters to the ideal temperature for lobsters”, she wrote in Summer 2018 for New York Times.

Of course, constant increase of temperatures will cause only a momentary boom in certain industries, such as lobster fishing, and for a long run it is rather dangerous and problematic. However, when Nova Scotia became one of the key regions for lobster fishing worldwide, conservation laws quickly took place in order to avoid overfishing and keep lobster fishing for years to come.

The lobster industry in Nova Scotia is strictly monitored to ensure the protection of species and fishing licenses are not available to get anymore. In order to get into the lobster business, fishermen have to purchase the license from another boat and cover extremely expensive costs.

At the same time, the lobster fishing season lasts 4 to 6 months and the government set a rotation method in which only certain boats are allowed to fish for a time period. Due to this monitored system, Nova Scotia is known for having a very sustainable lobster population and for preparing themselves if the waters of the Atlantic coast get too warm and the lobster population decrease.

Nova Scotia is the place to eat lobster and with prices starting 10 EUR for a lobster dish, it would be a crime to skip this delicacy while visiting the region – especially when Nova Scotians get so creative with the variety of dishes they prepare with it.

Read more: Climate change is transforming the future of wine

After having traveled in the region for almost 10 days and eaten at least 10 different lobster meals, here are five of the best lobster places I found in Nova Scotia:

Where to eat: Hall’s Harbour Restaurant

What makes it so special: classic lobster should be ordered by the pound and in Hall’s Harbour they will not only offer that, but also provide a full lobster experience. The restaurant is located at the world-renowned Bay of Fundy and with fishing boats, lobster traps and the coastline as a window view, there is no better place to go for a classic.

What makes it so special: Lunenburg is an obligatory stop for every traveler visiting Nova Scotia and Old Fish Factory should be as well. Their variations of seafood dishes at this restaurant are extremely creative and when you hear that someone comes out with the idea of serving fresh lobster cream and sweet honey as a topping on fish, you know this place can’t go wrong.

Where to eat: Charlotte Lane Café in Shelburne

What makes it so special: Chef Roland Glauser creates Swiss inspired food with a local flair and his cream lobster is a good example of it. This exquisite casserole of lobster, scallops, cream, cheese and local spices is the perfect dish for a European winter with a fresh Nova Scotian twist. I would call it: A Nova Scotian fondue.

Read more: Why Europeans drink so much sparkling water?

Where to eat: Waterfront Warehouse Restaurant in Halifax

What makes it so special: Mac & Cheese is such a simple dish, but at the same time complicated in detail. Each additional ingredient can change its flavor completely and the wrong choice, would simply turn the dish into cheap fast food. While traveling Nova Scotia I tried lobster mac & cheese in at least three different restaurants and probably the only one that walked perfectly that thin line between a delightful lobster dish and unhealthy (but delicious) decadent food was Waterfront Warehouse.

What makes it so special: The staff at White Point know exactly how to make your time in Nova Scotia memorable and if having dinner under the stars next to the beach doesn’t sound magical enough, their cream lobster with cognac will. This was probably the best lobster dish I had in the whole province and a highlight for any foodie – as well for anyone who simply likes food.

How to get to Cano Cristales – the rainbow river of Colombia 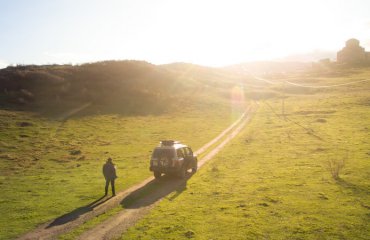 How to plan a road trip in Georgia 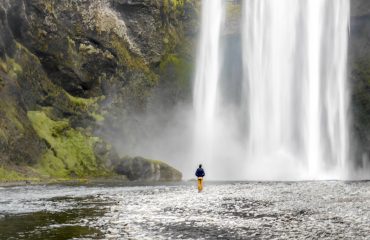 Making the most of a 5-day trip to Iceland