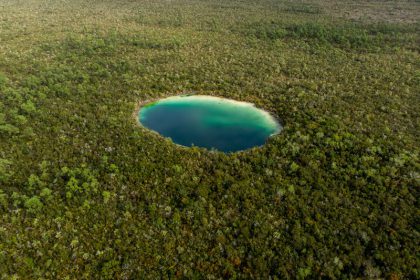 Commonly known as the “big yard”, the island of Andros is the largest and least explored island of the Bahamas.

It´s a paradise for adventurers who want more than just a normal tour.

The sound of the waves lapping the shore and a refreshing tropical breeze flowing through the open door of my beach front cottage. The sun peaking slowly over the horizon and the skies turning from dark blue to different tones of pink with yellow rays. That´s how I will remember waking up in Andros. No alarms or noisy neighbors, just nature welcoming a new day. In Andros you won´t hear a single sound of a cruise ship docking or tour organizers trying to sell tours for swimming pigs. On the Bahamas’ largest and most isolated island it is just you, nature and one or another vehicle you encounter while driving over the only highway on the island.

Read more: How I photograph the milky way when traveling

A raw paradise not fully discovered

Andros is the fifth largest island in the whole Caribbean and still it is one of the most untouched. Its unique topography and geography make it very difficult for settlement and although it’s twice as big as Luxembourg, it only has a population of 8000 people. Life is simple on this island. There is no public transportation, there are just a few lodges, internet is limited, and cocktail evenings are rather homemade meals next to the beach. 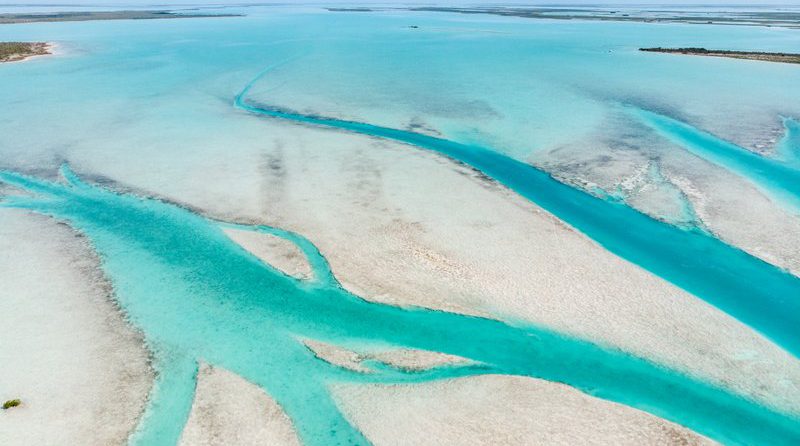 This lack of development has kept the island´s natural habitat practically undamaged. Andros’ barrier reef, the third largest barrier reef in the world, lies almost directly next to the shore and is home to hundreds of marine life species. Here, it is common to see sharks swimming around you while snorkeling by the shore and dive with whales or dolphins when going deep into the ocean. 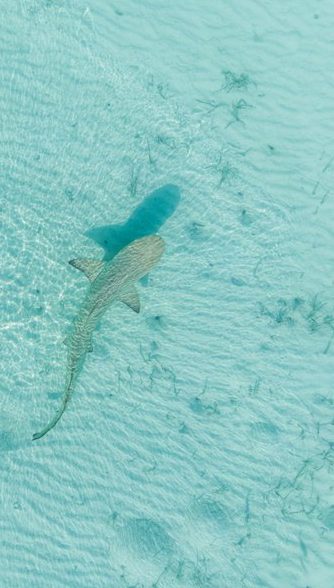 Shark swimming next to the beach shore in Andros, Bahamas

Andros’ biggest treasure, the West Side National Park, is only reachable by speed boat with a local fishing guide. This isolated land of white clay coast, twisted mangroves and intense clear blue sea is so vast, that it is normal to eventually lose orientation and feel as if lost on an alien planet. Just the sight of flamingos on the horizon or a fisherman passing by reminds you that you are still on planet earth.

However, one of the most amazing facts about this island is that Andros has not been fully explored. There are still many blue holes or underwater caves along the island no human has dared to dive in deeper to see which wonders the island still has to offer.

Andros: An island for those who want a full getaway

This paradise is not for everyone. Most visitors in Andros are looking for a rural and basic experience and if you expect to see the Bahamas of reality shows and Instagram, you will simply be in the wrong place. Here, visitors want to take a break from the stressful life back home and, for a moment, be in the middle of completely intact nature.

“Tourism will grow, but Andros won´t change”, says Bahamian/Canadian Jeff Birch, the owner of the Small Hope Bay Lodge, the first diving resort in the Bahamas and one of the most known lodges in the country. “Visitors come here because they just love the simplicity of the island”, he adds.

My stay in Andros was short, but it was enough to see sharks, dolphins, iguanas and explore many different landscapes. This island kept me away from my cellphone for a whole week and reminded me how to sit back and just enjoy the view.

Road trip in Curaçao – Discovering a different side of the ABC islands
Tagged under: Andros, bahamas, caribbean

How to get to Cano Cristales – the rainbow river of Colombia 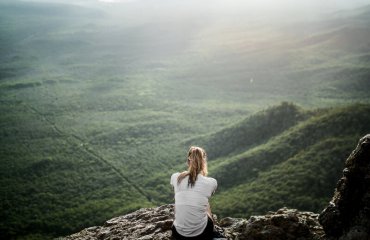 Iguacu Falls – the mighty waterfalls that go beyond imagination